Just like all of us in the civilian world, the military increasingly relies on batteries to keep crucial mobile devices charged. But to do that, they have to lug around large, mobile battery arrays and devote a lot of logistical energy towards keeping these devices powered.

Imagine the tactical advantages that would come if such essential tools were automatically—and wirelessly—kept charged.

With the newly emerging WiGL technology, the brave men and women of the military won’t have to worry about carrying around unnecessary charging gear, nor spend precious time charging equipment. Imagine the tactical advantages!

In a recent article by online military magazine Breaking Defense, writer Sydney J. Freedberg, Jr. asked the Commandant of the Marine Corps, Gen. Robert Neller, to share his “wish list” for the infantry.

While there are plenty of new toys Neller could have put at the top of his list, his top priority was quite a bit simpler.

According to the article:

“That’s a really hard question,” Neller said. He thought hard for a moment before saying what Marines really needed was a way “to recharge batteries — or maintain a sort of expeditionary power capability that doesn’t cause me to have to pull a wagon or something.” (Don’t make the infantry drag diesel generators around, for example).

Marines need “a smart way to recharge batteries, because we keep putting more stuff on ’em, and the more batteries you’ve got to carry, (it) just adds the weight,” Neller said. “The battery’s got to either last longer, or I’ve got to be able to recharge it, or it’s got to be some other form of power.” 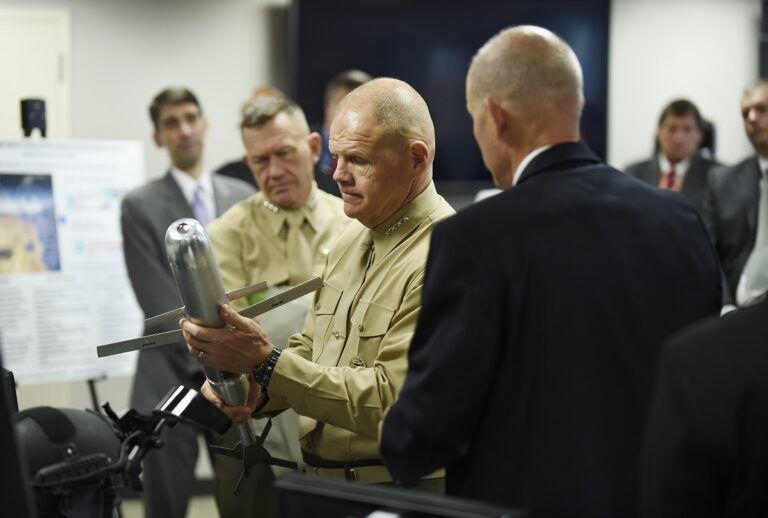 In the Breaking Defense article, Gen. Neller said he wants every rifle squad to have its own unmanned aerial vehicle (“drone”), but the biggest obstacle to this goal is, as he says, battery power.

Imagine constantly powered drones that don’t require massive batteries or downtime due to recharging or refueling.

This isn’t a pipe dream; the technology is already available for licensing. The powers that be just need to be aware of it and begin implementing it. If you’re interested in improving the overall capabilities of our military, write your Congressman now about WiGL!